Stay tuned for info on next year’s events.

Kira Bucca – I Am…, Photography
Aamil Qureshi – The Journey (A Cycle), Visual Art: ink and mixed media on paper

Belonging: an evening on topics of identity

“Sasha Matthews is a cartoonist, activist, and 8th grader. Following the 2016 election her “Everyday Superheroes” fundraiser collected over $11,000 for the ACLU. She has been a guest on NBC’s “”Little Big Shots,”” was recognized by Crain’s “”20 Under 20,”” and featured by Microsoft as a kid who makes the world better through art. Her political cartoons have been published by Boing Boing, The Mary Sue, Hyperallergic. Local bookstores starting selling her first comics when she was in 5th grade.”

Erica A. Hart is the Casting Coordinator over at ABC PRIMETIME CASTING in New York City. She holds a BFA from New York University’s Tisch School of the Arts, where she studied film and television at the Maurice Kanbar Institute of Film and Television. With a plethora of productions in her portfolio, ranging from documentaries to fictional films, she has always continued to broaden her range of storytelling. Along with her creative partner Joseph Gerbino, she has received grants from the Puffin Foundation and The Digital Bolex Grant, in addition to developing new series for BET and WeTV. She began casting films her freshman year at NYU and has never looked back. She has cast feature films, shorts, music videos, web series, and commercials that have been featured at SXSW, Cannes, and other film festivals worldwide. She has worked on shows such as SMILF, The Goldbergs, Scandal, Broad City, 30 Rock and many more as well as commercials for ESSIE, MAYBELLINE, GILLETTE to name a few.

Jazmin Patiño is one of the Event Coordinators at Sephora Union Square. With a background in musical theatre, she took her passion for the arts in a new direction and has been part of the Sephora family for over a year. She is honored to take part in this festival and help show that beauty is in everyone, a little knowledge can go a long way, and confidence is power.

Teagan Rabuano is a recent graduate of New York University’s Tisch School of the Arts, where they studied Drama and Gender & Sexuality Studies. During their time at NYU, Teagan founded the Trans Artists Guild to advocate on behalf of the trans student community. Teagan has worked with the National Center for Transgender Equality, Lambda Legal and GLAAD. They have been featured on Condé Nast’s them., the Huffington Post and in GLAAD’s amp series. They will be returning to NYU this upcoming fall to obtain their Masters in Arts Politics. 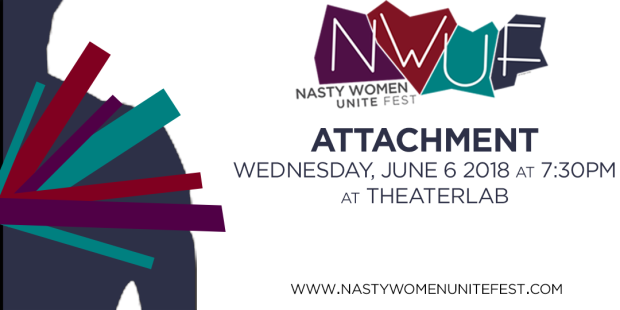 Attachment: an evening on topics of love and loss

Sarita Khurana is a Director, Producer, and Educator based in Brooklyn, New York. Her feature-film documentary debut, A Suitable Girl, premiered at the 2017 TriBeCa Film Festival, and won the Best New Documentary Director prize. Khurana’s critically acclaimed work in narrative, documentary and experimental film has been screened and exhibited internationally. Her work often focuses on South Asian stories, and explores female subjectivities. Migration, memory, marginality, community, territory, and sexuality are common themes in her work. Sarita Khurana was born in London, and grew in New York City. Khurana holds a B.A. from Oberlin College, an Ed.M from Harvard University, and an M.F.A. in Film – Directing, from Columbia University’s School of the Arts. In 2009, she was named as one of NY Women in Film & Television’s “Emerging Female Directors.” Her work has been supported by the Tribeca Film Institute, NALIP-Diverse Women in Film, Art in General, the National Film Development Corporation of India, Women in Film, the International Documentary Association, and Film Independent. Khurana is also the co-founder of Cine Qua Non Lab, an international development lab for narrative feature films, based in Mexico and the U.S.

Maybe Burke is a New York based theatre artist and trans advocate interested in telling the stories that haven’t been told. They are excited by new material that can honestly and realistically portray marginalized groups of people. They have worked with Joe’s Pub, Cherry Lane Theatre, Ars Nova, La Mama, HERE Arts Center, The Duplex, and more. Maybe is a co-curator of the Trans Theatre Festival at The Brick and the founder of The Trans Literacy Project. Artistic Associate, Honest Accomplice Theatre. BA Directing, Pace University.

Mariann Arcari Rubin, LCSW is a Licensed Clinical Social Worker licensed in both New York and Arizona. She received her Master’s degree in Social Work from New York University in 1992 and Post Masters training in grief and loss, depression, anxiety, parenting adoptive and special needs children, coping with medical issues, and issues relating to infertility and adoption. She is a Certified Grief Recovery Specialist for the Grief Recovery Program trained by the Grief Recovery Institute. She also provided adoption home studies for adoptive couples in both New York and Arizona for 18 years. Mariann has a private practice in Forest Hills, New York where she provides individual psychotherapy for adults struggling with any type of loss and the feelings that accompany it.

Strive: an evening on topics of power and career

Writer, activist, actor and director Amber Tamblyn will be in attendance, in anticipation of her debut novel ​Any Man. This narrative piece, which follows six men, is a groundbreaking work that challenges our understanding of rape culture and the experience of human trauma. In addition to this new piece, Amber is the author of the critically acclaimed poetry collection Dark Sparkler, has been nominated for Emmy, Golden Globe, and Independent Spirit awards. Tamblyn reviews books of poetry for Bust Magazine, is poet in residence at Amy Poehler’s Smart Girls and is a contributing writer for The New York Times. Her work has appeared in Glamour, Teen Vogue, the San Francisco Chronicle, the Iowa Review Poets & Writers, PANK, and elsewhere. She is an avid proponent of equity and a founding signatory of Time’s Up. Any Man publishes on June 26th, 2018.

Juliet Izon is a 10-year veteran of the magazine industry, having held jobs as diverse as nightlife reporter to celebrity wrangler. The former Entertainment Editor for Niche Media (Gotham, LA Confidential, Hamptons, Ocean Drive, etc), she is now a freelance lifestyle writer, covering topics such as food and restaurants, design, travel, and parenting. You can see her work in Architectural Digest, Bon Appétit, Epicurious, Good Housekeeping, Time Out New York, Redbook, and many others. In her free time, she also writes her own blog, Juliet’s Married, and is the mother to two-year-old Aveline. 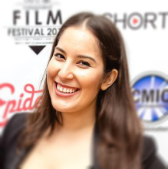 As a native New Yorker, Maria has a love for indie film with a background in communications. In the past, she has worked with the publicity team on the theatrical release of Canadian documentary REVOLUTION in New York City. She worked as production coordinator on the documentary series BEYOND MOSCOW, and currently on LOST AT SEA. Maria recently completed her tenure as Narrative Feature Film Curator and Director of the NYC Independent Film Festival.

Meredith Talusan is the executive editor of them, Condé Nast’s first-ever platform devoted to the queer community. An award-winning journalist and author, Meredith has written features, essays, and opinion pieces for many publications including The Guardian, The New York Times, The Atlantic, VICE Magazine, WIRED, The Nation, Mic, BuzzFeed News, and The American Prospect. She is the recipient of the 2017 GLAAD Media Award for Outstanding Digital Journalism, and has contributed to several books, including Nasty Women: Feminism, Resistance, and Revolution in Trump’s America. Meredith graduated from Cornell University with an MA in Comparative Literature and an MFA in Creative Writing; from California College of the Arts with an MFA in Visual Art; and earned a BA in English and American Literature from Harvard University. Her memoir, Fairest, is forthcoming from Viking Press, a division of Penguin Random House. 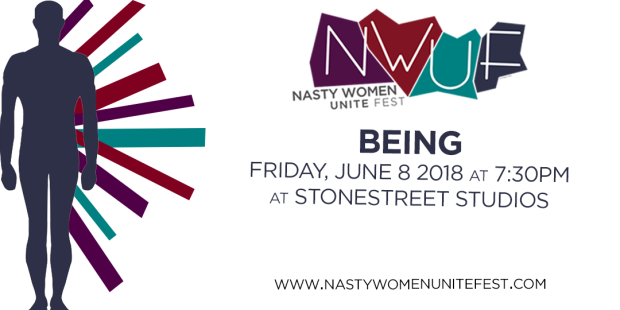 Being: an evening on the topics of mental, emotional, and physical health 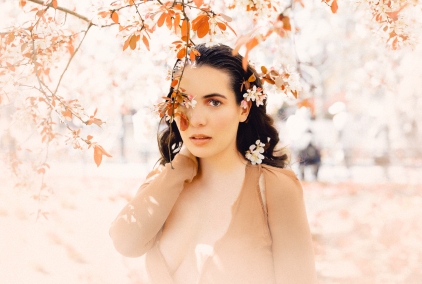 Jelena is a graphic designer and photographer that douses amazing humans with confetti, exploring what they celebrate in their lives. As a creative entrepreneur with a background in Psychology and Design, she’s always trying to create powerful visual storytelling, which is how The Confetti Project was born. Not only was this project the first thing I ever finished, but it’s changed her life in being able to tap into daily gratitude even amidst grieving the loss of a beloved parent. Now, her goal is to deeply connect with as many humans as possible, giving them a space to fully let go from everything and be comfortable being vulnerable. Her few loves: coffee table books, 20-second hugs and doing one thing a day that scares her.

Lianna Nielsen is an actress and certified health coach through the Institute of Integrative Nutrition. In addition to acting in films and television, she teaches Nutrition for Performance at the Maggie Flanigan Studio, lectures on nutrition, and works privately with clients. Lianna’s main focuses are the health of the microbiome (gut health), hormone balance, adrenal health and weight loss. She is passionate about the mind-body connection and helping people discover what they need to be healthy, happy and successful. 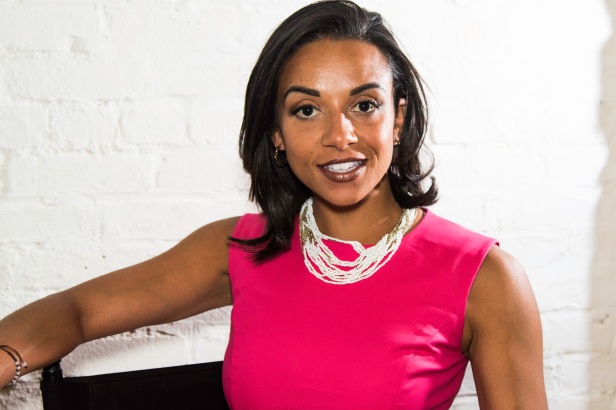 Michelle Hope is not your regular Sexologist she is a passionate EDutainer who combines her love of Pop-Culture, Entertainment, and Sexuality into opportunities to educate and motivate. With a Master degree in Human Development and extensive post graduate training in sexuality. Michelle is deeply knowledgeable about the holistic implication of sexuality on one’s life presented in the many different intersections; including reproductive health, sexual identity, sexualization, intimacy as well as society and the media. She also had created a unique language to help people identify how sexuality is impacting their day to day interactions. As a veteran speaker with over 10 years’ experience she has delivered timeless lectures across the country working to help contemporary urban professionals understand those intersections to make connections in their pursuit to success.